If a stray cat has been hanging around your home, you might not only be wondering if you should be feeding it but also what the most appropriate type of food to give it would be. What to feed stray cats something that many of those coming across these lost or abandoned pets ponder. At the end of the day, it could very well be the case that you do not want to spend your hard-earned cash on tins of cat food or cat biscuits for an animal that does not belong to you. Just to summarize before I get into the article proper:

The best foods for a stray cat include, among others, the following:

You can give a stray cat the following foods as a snack, but keep them to a minimum:

More ideas follow in the rest of this article. Is it a Stray or a Feral Cat?

You might initially want to ascertain what sort of cat it is that’s been hanging about your house or neighborhood. A stray cat is usually one that belongs to someone else but has either lost its way or is simply on the hunt for extra food. Sadly though, some stray cats have been abandoned and are searching for food. These cats may find it difficult to survive without human intervention.

A feral cat is a wild cat that will not have had much contact with humans. Ferals tend to be both unfriendly and unapproachable. However, that does not mean that you should not feed it; it just means that it is unlikely to come to you for food, at least in the beginning.

A stray cat that belongs to someone else will already be familiar with humans and will be used to human contact. This type of cat is much more likely to come to you for food, even allowing you to touch it.

What Not to Feed a Stray Cat

If a cat has been sniffing about your home, you may get the urge to feed it. You can of course buy cat food if you want to ensure that the cat is getting the nutrition it needs, but you don’t have to go this route if you do not want to.

You may have been raised to believe that cats love milk. If this is the case, then your first instinct may be to put down a bowl of milk. However, while the cat will almost certainly drink it, it is not a good idea as cats do not have the necessary enzymes that allow them to process cow’s milk. It is much better to give the stray some clean water to drink instead.

Although most cat owners would be horrified at the thoughts of offering dog food to a cat, people with little knowledge of cats may believe that it is appropriate to give a stray cat some of their dog’s food. This is not a good idea. Pet food is specifically formulated and created to suit the needs of the particular animal it is intended for. It is made in such a way as to be easily digested by the specific type of animal. As the biology of cats and dogs are completely different, it would be inappropriate to give food that is intended for one to the other.

Although a stray cat that is hungry is highly likely to eat almost anything you put in front of it, it is important to think carefully about what you are giving it. For example, fruit and vegetables by themselves could cause gut problems for the cat – particularly if these are potatoes or tomatoes.

Then there are some foods considered toxic for cats including chocolate, onions, garlic, avocado, and grapes. Avoid giving these types of foods to any cat, including strays.

You should definitely not feed stray cats (among other things): 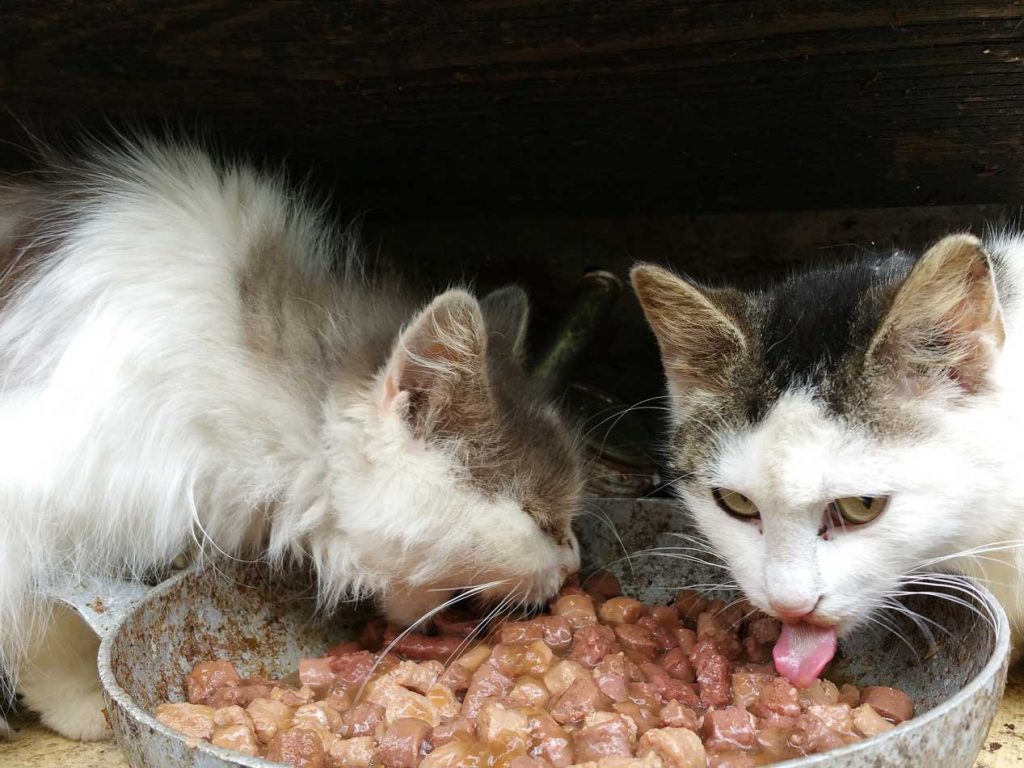 What Foods are Suitable?

When it comes, then, to what do stray cats eat, the answer is anything within reason while trying to avoid everything noted in the above paragraphs. Nevertheless, this does not literally mean giving them whatever you have to hand.

Cats need an amino acid known as taurine, but because they are unable to produce this themselves, they fulfil this requirement through eating meat. However, cheese and eggs are also suitable if there is none of the above-mentioned meats to feed the cat with.

Most of us have a tin of tuna in the cupboard, and this is usually a good option in terms of tempting a stray cat to come and eat. The smell of the fish should encourage the cat to come for food. Even so, although tuna is a good initial choice if there is nothing else appropriate to hand, it is not suitable for regular feeding. This is because most tins of tuna, especially those in brine, contain too much salt for the animal to handle over an extended period.

Other types of suitable protein include beef, lamb, and chicken. Boiled rice is another good choice if you want to bulk up a plate of food for the cat. You can chop up plain boneless meat and add it to boiled rice for a great nutritional meal for the stray. Cooking the meat is preferable to giving it raw as although the cat is likely to eat the raw meat, it could contain bacteria that might make it ill.

It is best to give the cat a small amount of food initially. Starving cats may eat more than their stomach can handle, which could then cause them to become ill. Furthermore, if you are giving a stray cat food that it is not used to, it could upset its stomach.

Furthermore, it is best to avoid processed foods. Some people assume that because the cat is a stray, it will be able to digest absolutely anything; this is definitely not the case. Actually, processed foods can cause stray cats to become quite ill.

All in all, if you are going to feed a cat that has been hanging around outside, think carefully first.

There are some foods that you might not ever consider giving to a cat but that are entirely okay if served with some meat or fish. Think blueberries, bananas, cucumber, asparagus, and even eggs. Most people would never even think of eggs, but a plate of unseasoned scrambled eggs will provide protein while being completely safe. You can even add some cooked sweet potato or pumpkin, which will aid digestion and calm an upset stomach. Should You Rehome a Stray Cat?Now that you know what to feed a stray cat, you may be wondering what to do with it. The answer depends on whether you believe the cat has been well cared for by another person or whether it has been abandoned. It will also depend on whether you are willing to rehome the cat.

If the cat is in good health, it may be that it has wandered far from home and is unable to find its way back. Alternatively, perhaps it is a cat that has wandered from a nearby home and is just ‘visiting’ you for extra food. If so, it is probably best to check for an owner.

If the cat is allowing you to handle it and you are in a position to take it to a nearby vet, you could take it to be scanned for a microchip. Most responsible pet owners will have their beloved pet microchipped so that they can be reunited with it in the event that it is lost or stolen.

You could also consider putting up some signs or posting on social media to see if you can find the owner. You may find that someone is searching for their lost cat.

If the cat appears to be underweight and/or in poor health and you are unable to find an owner, you may want to consider rehoming the cat yourself. After all, if you have been feeding it for some time, you are likely to have developed a certain attachment to it. If this is the case, then rehoming the cat could improve its life dramatically.

If you have never had a cat before, it is important to consider the needs of the animal before you make your decision. The good news is that cats are relatively easy to care for. They do not need to be taken for walks and they do tend to clean up after themselves, unlike dogs.

A cat can be a playful and affectionate pet provided that it is cared for probably. Ensuring that the cat has adequate food and water is important, but you will also need to interact with the animal. Most cats like to be groomed and petted.

If you have decided to re-home the stray and believe that you can take care of it properly, you will also need to take the cat to the vet to be checked over. It may be the case that it will need certain vaccinations. It is also a good idea to have it microchipped and registered to ensure that it will be returned to you if it gets lost.

I am a content creator by profession and I just love cats. I have 3 of them at the moment: Tilly, Marmalade, and Sooty. But rather than write your typical cat blog, I decided to focus on the less covered topic of stray cats. I hope you enjoy the blog.

Stray Cats Advice is a participant in the Amazon Services LLC Associates Program, an affiliate advertising program designed to provide a means for sites to earn advertising fees by advertising and linking to Amazon.com and affiliated sites.

This website uses cookies to improve your experience while you navigate through the website. Out of these, the cookies that are categorized as necessary are stored on your browser as they are essential for the working of basic functionalities of the website. We also use third-party cookies that help us analyze and understand how you use this website. These cookies will be stored in your browser only with your consent. You also have the option to opt-out of these cookies. But opting out of some of these cookies may affect your browsing experience.
Necessary Always Enabled
Necessary cookies are absolutely essential for the website to function properly. This category only includes cookies that ensures basic functionalities and security features of the website. These cookies do not store any personal information.
Non-necessary
Any cookies that may not be particularly necessary for the website to function and is used specifically to collect user personal data via analytics, ads, other embedded contents are termed as non-necessary cookies. It is mandatory to procure user consent prior to running these cookies on your website.
SAVE & ACCEPT