How to Tell if a Stray Cat is Pregnant: 7 Signs to Look For

Figuring out what to do with a stray cat is tough enough under normal circumstances. Pregnancy just adds another layer of challenges to work through. Do you try to help a pregnant cat, or do you leave her to fend for herself? Do you attempt to get her to the vet for a physical? Well, none of these questions can be answered until you first establish that the cat is indeed pregnant.

The good news is that a stray cat will exhibit the same signs of pregnancy as a house pet or feral cat. If you know how to spot pregnancy in one kind of cat, you can spot it in all of them. Note that the first couple of signs relate to behaviors that would indicate a female cat is in heat. We include them for one simple reason: if you do observe a cat in heat then it is wise to begin looking for the signs of pregnancy soon after heat concludes. With that said, let’s get to it.

Female cats reach fertility as early as four months of age, though it is typically closer to six months. A cat need only reach about 80% of her adult body weight in order for her estrus cycle to begin. So that’s the first thing to consider.

You may not know exactly how old the cat is, but if it looks large and heavy enough to be an adult, then it is likely the cat is able to reproduce. This suggests that you should watch for changes of behavior related to the temperature.

If you notice unusual behavior by a stray cat – especially when it’s warm outside – that’s a good indicator she is in heat. Also note that a cat’s cycle can last as little as one day or as many as seven.

This brings us to the actual behaviors you should be looking for. A cat in heat will exhibit a number of behaviors, beginning with what appears to be especially affectionate behavior. Around humans, a cat in heat will rub up against legs more frequently and for longer periods of time. In the absence of humans, the animal will take its rubbing behavior to inanimate objects like rocks, trees, furniture, or anything else it finds suitable.

Another heat-related behavior is rolling on the ground more frequently than normal. Along with this behavior, a cat in heat will raise her rear quarters and attempt to tread with her legs while on her back. As heat progresses, she will begin to howl. The howling can become quite loud and intense.

Finally, a stray cat will urinate more frequently if she is in heat. She’s doing this in order to let any toms in the area know she is ready to mate. So watch for frequent urination around the yard.

As a cat’s breasts and nipples begin enlarging in anticipation of the arrival of kittens, they become more visible through the animal’s fur. This is known as ‘pinking up’. It is really hard to miss in the later stages of pregnancy. The process of pinking up usually begins somewhere between days 15 and 18. You’ll know it as soon as you see it.

During the early stages of pinking up, you’ll probably only notice that the cat’s nipples have turned pink and can be easily seen through the fur. By the fourth or fifth week though, you should begin to see the breasts and abdomen enlarge. If you see her standing on all fours you should notice two bulges on her underside. The upper bulge is that of her breasts while the lower one is her belly. The belly bulge should hang lower.

The belly bulge will obviously grow bigger as the cat progresses through pregnancy. Her breasts should reach a certain size and then stop growing beyond that.

Just like in human beings, the hips of a pregnant cats become more pronounced as pregnancy progresses. This is in preparation for delivery. You should notice more prominent hips whenever the cat is standing all fours. They will be especially noticeable from behind.

5. Movements in the Abdomen

From about 5 to 6 weeks it is possible to see movement in the cat’s belly. You know what this is: it’s those kittens moving around inside. You can confirm pregnancy if the cat is willing to let you get close enough to put your hand on her belly. Otherwise, you should be able to visually observe the movement as the day of delivery gets closer. 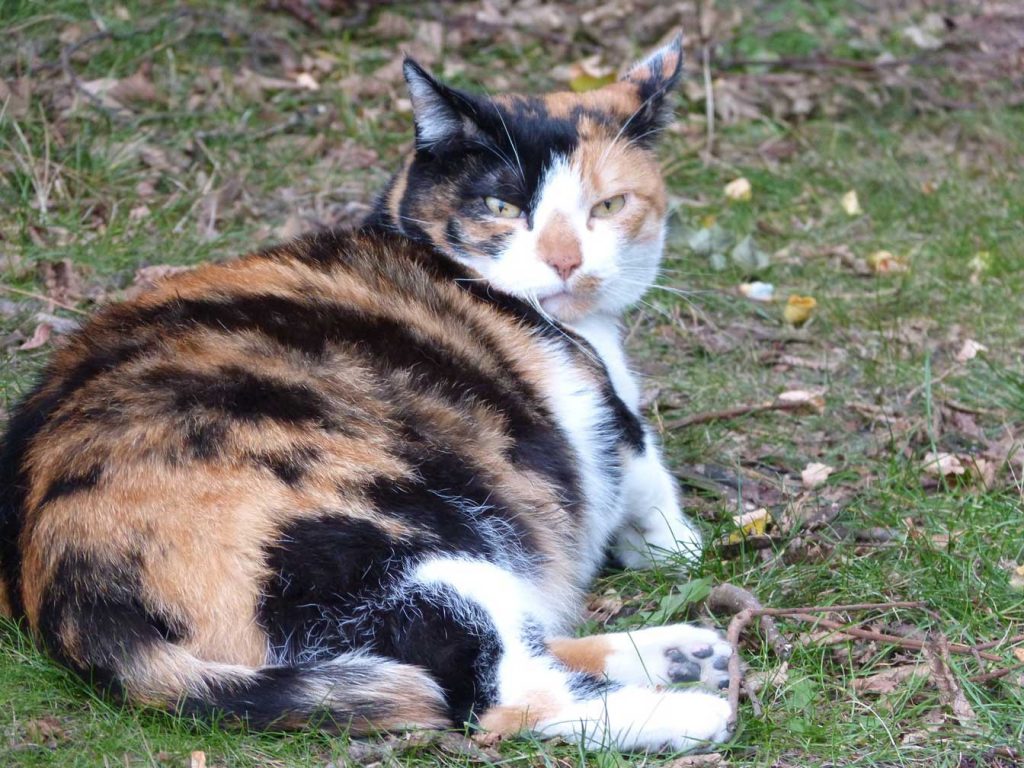 A pregnant cat is a lot like a human mother in terms of eating habits. Simply put, a pregnant cat needs more calories. She will eat more often as a result. Some pregnant cats have voracious appetites that seem to never be satisfied. The cat may always be looking for more food.

If you decide to feed a stray cat, pay attention to how often she begs for food. If she begs a lot, eats it all, and starts putting on weight in the abdomen, you may have a pregnancy on your hands.

Hand-in-hand with increased eating is more sleep. Cats already sleep excessively compared to other animals, but a pregnant cat will sleep even more. The further along she gets, the more time she will spend sleeping. That leads us to the final sign: nesting.

Most female mammals have a built-in nesting instinct that begins displaying itself during the final days of pregnancy. You can observe this instinct in a stray cat by paying attention to where she spends most of her time. The nesting instinct tells her to find a safe, quiet place to give birth.

Let’s say the cat in question normally spends a lot of time hanging around your back porch. If she’s pregnant, more of her time will be spent elsewhere. Follow her at some point and see where she goes. If it appears as though she is looking for quiet solitude, pay attention to how much time she spends there. If she is pregnant, she’ll spend more time in her quiet place the further along she progresses.

So, you have observed all seven signs listed above in that stray cat hanging around your house. Chances are that she is pregnant. However, there are no guarantees. It is possible for a female cat to appear pregnant even though she’s not. In the veterinary world, this is known as ‘false pregnancy’. The condition is more common in dogs, but cats can experience it as well.

Pet MD explains that the exact cause or causes of false pregnancy are not known. One theory suggests it might be a result of some sort of hormonal imbalance. Another theory maintains that false pregnancy may be a symptom of an underlying condition in the ovaries or uterus. At any rate, Pet MD lists several different symptoms that indicate false pregnancy:

Some of the symptoms of false pregnancy mimic those of the real deal. It would appear that the two most prominent telltale signs are the last two. If everything else points to pregnancy and yet you observe vomiting and the nipple discharge, you could be dealing with false pregnancy.

The unfortunate thing about false pregnancy is that there is really no way to tell without taking the animal to a vet. So if you are concerned about a false pregnancy scenario, you could do one of two things. You could wait it out and see if the cat gives birth. Then you obviously go from there.

The other option is to attempt to capture the cat and get her to a vet. Beware that taking the animal in will incur some costs on your part. The vet is also likely to ask you questions about the animal’s health and the onset of symptoms. Just be honest and tell him or her everything you know. If you do not have any answers to offer, just say so.

The vet will conduct a thorough physical exam to determine whether the animal is pregnant or not. If necessary, blood tests may be ordered. Some vets might also want to test the cat’s urine. If all else fails, the vet may rely on x-rays and ultrasound imaging to figure out what is going on.

We say all of this just to let you know that taking a stray cat to the vet out of fears of false pregnancy can get expensive. Of course, you are free to turn down any treatment you do not want to pay for, but then why take the animal to the vet to begin with?

How to Care for a Pregnant Cat

We have prepared a comprehensive guide explaining how to care for a pregnant cat. We urge you to take a look at it if you have determined that your care-giving services are going to be necessary. Here are the basics:

So, what do you think? Is it possible that the stray cat you’ve noticed wandering around could actually be pregnant? If so, you are in for a real adventure. It may not be long before you have little kittens running about.