How to Take Care of a Pregnant Stray Cat

Finding a stray cat wandering around the yard is one thing; finding a stray that is also pregnant presents an entirely different set of concerns. She is going to have those kittens one way or the other, so the only question is whether you are going to participate or not. There are very valid reasons for both helping the cat and simply ignoring it.

Assuming you do decide to take care of the animal, you are going to want to do it right. Handling a pregnant cat incorrectly could result in unanticipated consequences – some of which you could end up regretting later on. We encourage you to take some time and do plenty of research before you get started. Remember, you are dealing with both mama AND her babies. As always, we have to start the discussion by talking about the difference between strays and feral cats. A stray is a cat that is either lost or was abandoned by its owners. Strays are used to human contact. In fact, they depend on it. Expecting a stray cat to get through pregnancy and the early stages of motherhood without help is asking a lot.

Why make this distinction? Because it is generally a bad idea to try to care for a pregnant feral cat. Feral cats are already leery of humans and adding babies to the mix could turn violent. You are better off leaving feral cats alone. As for strays, they typically need as much help as they can get. 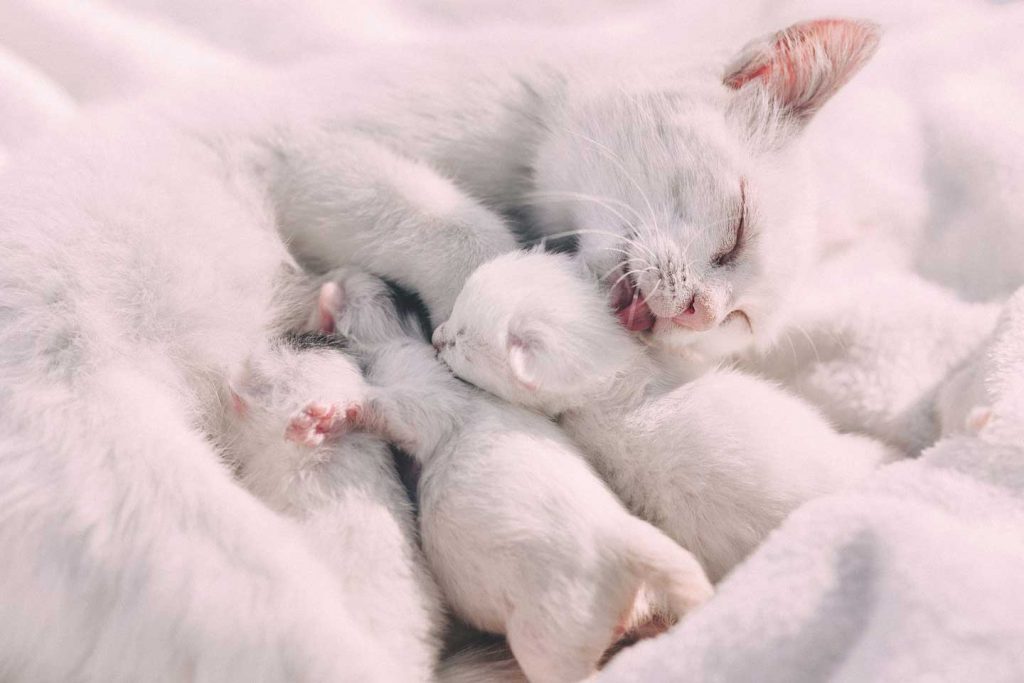 A well-known strategy for dealing with stray and feral cats outside of pregnancy is known as trap, neuter, return (TNR). The goal is to get the cat proper medical care while at the same time preventing it from producing any more children. Then the cat is ready to be returned to where it was found. This strategy is controversial enough on its own, but it is not workable for pregnant cats.

An alternative to TNR is trap, neuter, foster (TNF). The goal here is to make sure both mother and kittens get the care they need to both stay alive and thrive. After kittens have been weaned, mama can be neutered to prevent further litters. You will probably want to neuter the kittens as well if you’re going to follow this strategy.

With that in mind, let us look at the three components one at a time. This is the hardest part of the TNF strategy. Pregnant cats are more nervous for obvious reasons. So even though you may have a stray cat used to human contact under normal conditions, she might be quite nervous during pregnancy. The closer she is to delivery, the more nervous she will get.

The recommended method for trapping is using what is known as a Havahart® trap. This is nothing more than a metal trap that looks like a cage with a single door on one end. It traps the animal without doing any harm. You simply bait the trap and leave it near where the cat normally roams. When she walks in and triggers it, the door behind her will close.

You can also make your own trap if you don’t want to spend the money on a commercial model. Whatever you do, make sure your chosen method of trapping is as humane and non-traumatizing as possible. You do not want to freak the cat out during the final days of pregnancy.

The idea behind fostering is taking the pregnant cat into your home and caring for her until the kittens are delivered. This may or may not endear you to her as a long-term care provider. You’ll have to just wait and see what happens. In all likelihood, the cat will be so preoccupied with her pregnancy that she won’t give you the time of day even after you bring her into the house. She will probably start looking around for a place to hide.

Cats in the final weeks of pregnancy begin nesting. You can count on your stray doing the same thing when you get her into your home. You can get ahead of the game by making up a bed for her in a quiet, cozy, private area of the house. You might want to take her there immediately upon releasing her from the trap.

Once her kittens are born, start making plans for what you are going to do with them. Start lining up people willing to take the kittens. Decide if you’re going to turn the cat loose or keep her as your pet.

The last step in the TNF strategy is neutering mom. This is considered the humane thing to do in order to prevent her from having any future litters that may not be able to find homes. If you plan to release the cat after she weans her kittens, neutering becomes even more important. Irrespective of your position on the TNF strategy, one of the big things you’ll have to worry about during the cat’s pregnancy is making sure she gets enough to eat. Under normal conditions, a house cat weighing about 10 pounds needs to consume 200 calories per day to maintain her weight. A pregnant cat is going to need a lot more.

You don’t have to worry about feeding the cat on a schedule while she still pregnant. However, it is better to feed her up to six small meals per day rather than two large ones. Like a human mother, the pressure of the kittens in the womb make it impossible for her to eat as much as she normally would. So she needs smaller meals more often. As for water, just fill a bowl and leave it out. She will drink when she needs it.

You probably have a natural desire to create a nursery for mom and her kittens. That’s fine. Just try to think like a cat instead of a human. Remember, you are dealing with an animal. A pregnant cat does not need pretty flowers, decorations, and just the right splashes of color. She needs a quiet and private place to give birth without interference.

Experts say that a plain, cardboard box makes a great nursery. Line the box with blankets or sheets you are willing to dispose of afterward. You can make the space a bit more natural by adding some leaves, pine needles, etc. The box should be big enough for her to move around in comfortably. It should have enough space to accommodate her kittens once they arrive.

Another great idea for a nursery is a laundry basket. Laundry baskets tend to be large and roomy enough to accommodate mom and kittens without enclosing them in a cardboard box. Also realize that mama may not use the nursery you prepared regardless of your choice of materials. She might just decide that the best place to give birth is under your bed.

You will also want to minimize human contact during the last few days. So if you’re concerned enough to monitor the cat around the clock, you can put a web camera or baby monitor in the general vicinity of the nursery. Try to keep noise at a minimum so as to not disturb mom. It is very important during the final stages of pregnancy to avoid human contact as much as possible. This is not the time to hold her in your lap and stroke her fur. It is not the time to make baby noises at her. Mom needs and wants her privacy. Respect that.

If you do have to interact with the cat for some reason, experts strongly suggest you avoid touching her. You should only attempt to touch or pick her up if it is a matter of some sort of emergency. If need be, you can use a broom or a stick to move the cat in a particular direction or get a better look at her.

You should not pick up her kittens during the first few days after birth unless it is absolutely necessary. Mom will not take kindly to this, and she may decide to abandon her kittens if you touch them. Just hang out for a few days and watch. She will let you know when it’s okay to start interacting with the kids.

Your cat is likely to not require any human assistance during delivery. However, you can pay attention to what’s going on after delivery starts. There is nothing to worry about if kittens begin appearing 30 to 40 minutes after contractions start. If mama appears to be in distress for more than 40 minutes without a kitten appearing, there may be a problem. This is the time to call the vet and ask for advice. Otherwise, let nature take its course.

Some experts recommend getting mama and her new kittens to the vet within a day or so of delivery. Others say it is not necessary unless one or more of the animals shows signs of ill health. In the end, it’s ultimately up to you. If you are concerned about complications, it’s okay after a few days to take them all in. But take them together. Do not separate mama from the babies until she’s ready to force the separation.

Assuming you plan to foster mama and her babies until the kittens are weaned, you are looking at several weeks at least. In the meantime, the kittens are going to grow and start getting rambunctious. Plan for a lot of action around your home. You might want to set up a private area where the cat family can do what it does without interference from humans. Both mama and her kittens will come out when they want to see you.

Wrapping It All Up

At some point you are going to have to make a decision about what to do next. If you brought mama into your home to finish out her pregnancy, you will have to decide whether to return her to the outdoors or make her a pet. The same goes for the kittens. Just remember that putting them all outside also puts them at risk. If you can farm them out, it’s better for the animals.