Can You Get a Disease from Touching a Stray Cat?

If you wish, you can listen to the article instead of reading it:

There is a lot of fear about stray cats among the general public. Some of it is justified, but much of it is not. A case in point is the fear of disease. One of the first things people think of when they encounter a stray or feral cat is the possibility that the animal might be sick. That fear translates into a reluctance to offer assistance out of an abundance of caution. After all, no one wants to catch a disease after coming in contact with a stray. 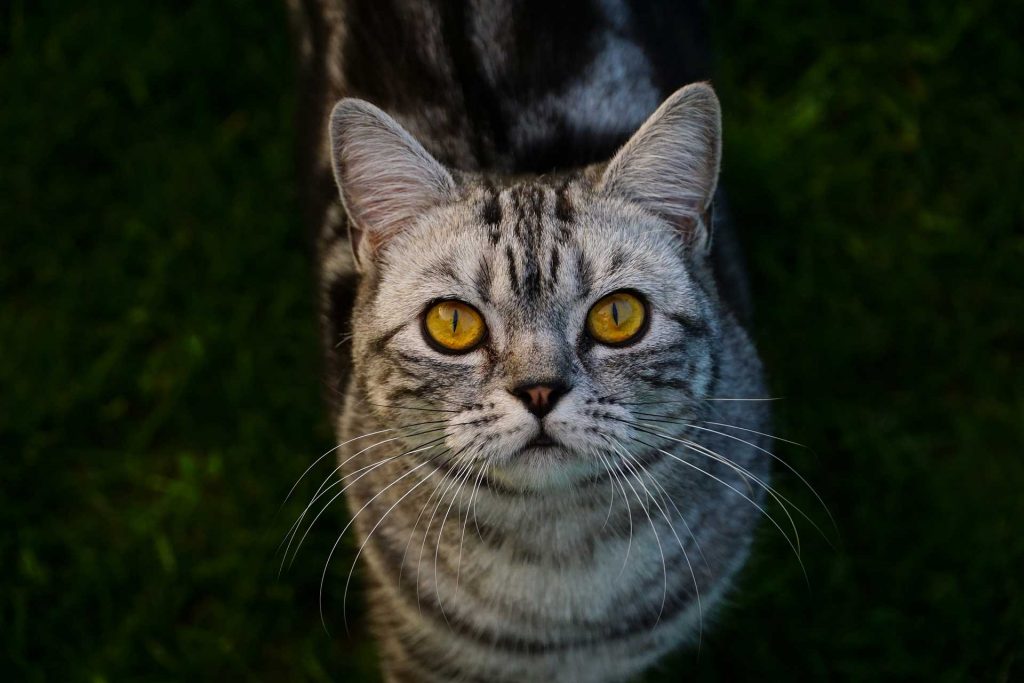 The simple answer to the question posed in the title of this post is yes, you can get a disease from touching a stray. However – and this is a big however – such cases are extremely rare. Merely coming in contact with a cat doesn’t put you at undue risk of catching a disease. If you get scratched, bitten or licked, that is an entirely different matter altogether. But simple touching is safe in most cases.

Below is a list of of the six most common feline diseases exhibited by both stray and feral cats. With the exception of rabies and bartonellosis, you do not have much to worry about should a stray cat in your neighborhood have one of these diseases. Obviously, you might consider taking the animal to the vet if you are at all concerned about its health.

This immunodeficiency disease is the result of a virus contracted by the cat. Interestingly enough, most cats that contract the virus do not begin to show symptoms until years later. And even at that, the symptoms they do exhibit are related to other diseases that afflict the animal once its immune system is severely weakened.

Humans are not at risk from feline immunodeficiency virus. Caring for a cat with this illness, in a stress-free and safe environment, usually allows the animal to live a comfortable life for its remaining months or years. Depending on when the cat contracted the virus, it could reach a normal lifespan.

Feline leukemia is another immunodeficiency disease contracted as the result of a virus. Many people confuse this disease with feline immunodeficiency virus, but they are distinctly different conditions. The most important difference between the two is that cats that contract feline leukemia usually die within a few years of being diagnosed.

Feline leukemia is not dangerous to humans. However, it is the leading cause of death in cats. The feline leukemia virus severely compromises the animal’s immune system. It also causes anemia and lymphoma as well. The good news is that upwards of 70% of cats that do not exhibit persistent infections leading to diagnosis also don’t die of the disease. Their bodies are able to eradicate the virus over time.

Toxoplasmosis is a disease you have to be worried about with stray cats. It is unlikely you would contract the disease merely by touching a stray, but your chances of contracting it increase if you come in contact with the feces of the infected animal. Note that toxoplasmosis is an infection related to one of the most common parasites in the world, known as gondii parasite.

Cats suffering with toxoplasmosis tend to be lethargic and depressed. They may also exhibit respiratory problems, a lack of coordination, and possibly even seizures and tremors. Unless you were familiar with the cat in question, you might not even recognize the symptoms. If you suspect a stray cat might be infected, observe it for a day or so before taking action.

A human who contracts toxoplasmosis may not exhibit any symptoms. Especially in healthy people, the human immune system is usually strong enough to deal with the infection on its own. When symptoms do develop, the most common are body aches, headache, fever, fatigue, and swollen lymph nodes.

In more severe cases, toxoplasmosis can lead to complications including loss of coordination, blurred vision, and confusion. Treatment is fairly successful with one of two drugs the doctor might prescribe.

This is another disease that can be transferred to humans but, again, casual contact is not likely to be the culprit. Bartonellosis is called cat scratch fever for a reason: humans typically contract the disease after being scratched or bitten. Although rare, it is possible to contract bartonellosis just by being licked by a cat.

In cats, the common symptoms of bartonellosis include conjunctivitis, swollen lymph nodes, breathing troubles (bronchitis), fever, and pneumonia. Despite the somewhat scary sound of such symptoms, most cats suffering from this disease don’t exhibit serious symptoms. To them, it’s like having the common cold.

Humans exhibit flu-like symptoms after contracting the disease. Low grade fever, swollen lymph nodes, and a rash or pustules at the transmission site are routine. Healthy individuals normally do not need any medical intervention as their bodies will address the issue via natural immune response. In cases where medical intervention is required, simple antibiotics usually do the trick.

Ringworm sounds a lot scarier to human beings than it actually is. It is another potential disease you might find in a stray cat that is harmless to humans. Ringworm is a fungal infection – not a worm – that is passed from animal to animal through close contact with one another or infected food dishes and bedding.

Cats infected with ringworm are usually diagnosed as a result of patchy hair loss. In those areas of hair loss, red rings may be observed. A cat suffering from ringworm will typically show patches on the head, around the ears, and on the forelimbs.

The biggest concern with ringworm is how easily it spreads. Although it is not dangerous to humans, we can be carriers of the fungus from one animal to the next. That’s why it’s so important to handle a cat with care if you suspect it has the disease. Any fungus transferred to your skin or clothes can then be transferred to other animals in your home.

Also be aware that the spores that cause ringworm can live for up to a year following transmission. This makes it very difficult to eradicate the disease once it has taken hold in a home. Be very careful with a stray cat if you have any reason to believe it might be infected. If you absolutely must handle the animal, wash yourself thoroughly before you come in contact with any other pets in your home.

In terms of treatment, veterinarians prescribe different methods depending on the seriousness of the infection. Minor infections may be treated with an anti-fungal shampoo or ointment. More serious cases might require an oral medication. Ringworm typically has to be treated for several months to guarantee its eradication. The last disease on our list is the big one many people are afraid of: rabies. The bad news about rabies and stray cats is that it is almost always fatal. By the time a cat was to be diagnosed with the disease, it would be too late to treat the animal.

The disease is passed from one animal to another by way of saliva. Stray cats that exhibit evidence of having been in a fight with another cat are at risk of rabies.

On the positive side, remember that most stray cats are pets that either wandered away from home or were abandoned. This is good because household pets are often inoculated against rabies at some point in their lives. Provided the animal was up to date with its shots when first exposed to rabies, the chances of contracting it are minimal.

Having said that, rabies is dangerous to human beings. It is also transmitted to us rather easily. You can contract rabies from an infected cat by being bitten or allowing the animal’s saliva to come in contact with an area of broken skin. If you do contract rabies, you will need a series of inoculations to prevent getting sick yourself.

Cats infected with rabies exhibit strange behaviors that should be easy to recognize. An infected cat will act disoriented and strangely cautious. The animal might show signs of aggression or restlessness, along with increased vocalization. In the later stages of the disease, paralysis and seizures are common.

Now that we have gone through all the potential diseases a stray cat may have, it is time to talk about prevention. Again, remember that getting sick merely from touching a stray cat is extremely rare. Among the diseases you can catch, they all require something more than just casual contact.

The rule of the day for preventing disease is to simply handle stray cats with care. Never approach a stray cat under the assumption that it is completely healthy. It is always better to be safe than sorry. If the animal does not display any visible signs of disease, you may proceed with caution. As you get closer, look for anything out of the ordinary.

Any physical contact with a stray cat should be followed by thorough hand washing. If the animal came in contact with your clothes, you might consider washing them as well – especially if the animal showed any signs of ringworm. Definitely wear gloves if you see patches of lost hair with red rings in the center.

In the unlikely event you do catch something after coming in contact with a stray cat, don’t hesitate to see your own doctors as soon as possible. Neither bartonellosis nor toxoplasmosis are cause for panic, but you should still be treated anyway. As for rabies, that is a different matter. Early treatment of rabies virtually guarantees you will not get sick. But if rabies is left untreated, it can be fatal.

The Wonderful World of Stray Cats

And there you have it: everything you have ever wanted to know about stray cats and the potential for disease. The information provided in this guide gives you additional reasons to think long and hard about how you’ll handle a stray cat found hanging around your house.

Stray cats can make very good pets under the right conditions. But they can also be a big source of trouble. Where disease is concerned, taking in a stray cat may leave you with expensive vet bills you’re not prepared to pay. If that doesn’t bother you and you’re not afraid of getting sick yourself, that’s fine. Disease is not something you are concerned about. On the other hand, any concerns you have about disease are sufficient reason to be cautious around a stray.