If you wish, you can listen to the article instead of reading it:

There are plenty of reasons to be wary of a stray cat that doesn’t appear to be in the best of health. Among them is the risk of the animal passing on whatever ails it to other pets in your house. For example, many people wonder if a stray cat can make the family dog sick. In a word, yes. 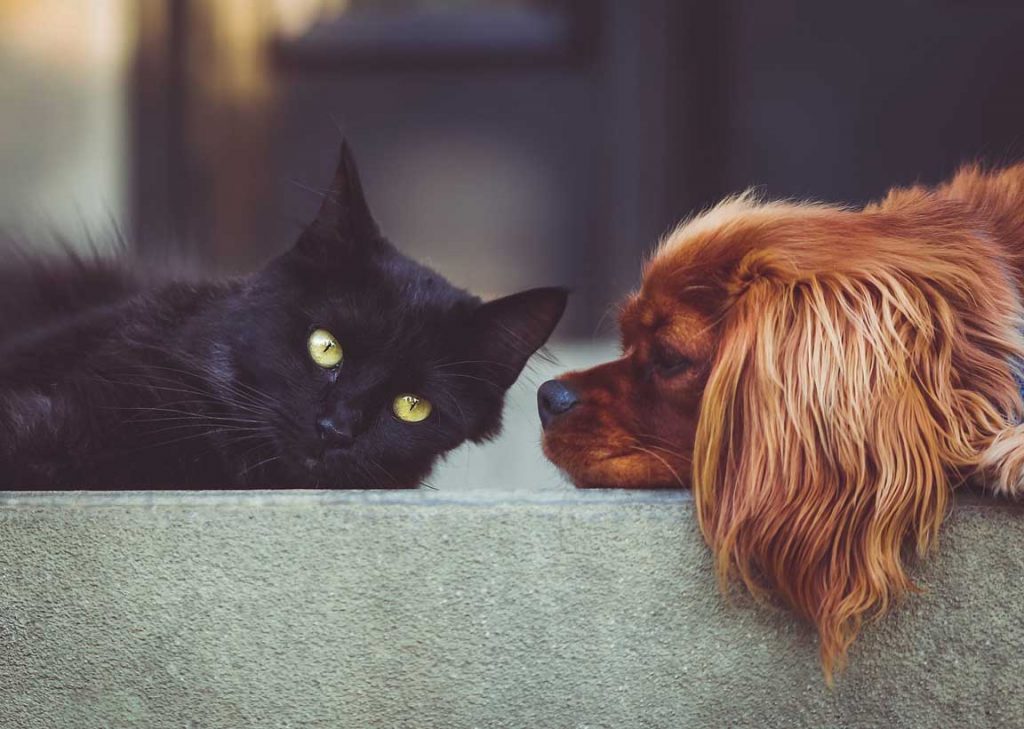 Though the number of diseases that can be freely passed from cats to dogs is relatively small, those that can be passed are passed pretty easily. All are very treatable if they are caught in time. As with most things pertaining to stray cats, paying attention to the little things can help mitigate the risk of your dog getting sick after interacting with a stray.

Here are 8 things to know about stray cats possibly passing diseases on to the family dog:

The first thing to note is that it is pretty difficult for most diseases to make the jump from one species to another. For example, cross-species transmission of viruses and bacteria is not that common. There are only a few known bacterial diseases that can be transmitted from cats to dogs, and even fewer viral diseases.

As far as zoonotic diseases are concerned, they are even more rare. A zoonotic disease is one that can be transmitted from animal to human. Some scientists contend that rabies is the only true zoonotic disease in the sense that its transmission is direct. But even among scientists that adopt a more liberal definition of the term, there is agreement that humans have very little to worry about in terms of contracting animal-specific diseases.

Among all of the illnesses passed between dogs and cats, intestinal parasites are the most common. Parasites like hookworms, roundworms, and tapeworms can live in the intestines of all kinds of mammals. They are passed between cats and dogs after one of the animals is exposed to the feces of another infected animal.

Tapeworms are a notable example of how intestinal parasites are passed from animal to animal. There are several ways these parasites can be passed. The first way, although it sounds terribly unappetizing to human beings, is for dogs to eat the feces of infected cat. This is not as unusual as it sounds.

Animal feces are not just waste to dogs. They are also a source of nutrition. What a cat leaves behind may meet a nutritional deficiency you do not know your dog is suffering from. At any rate, pieces of tapeworm or tapeworm eggs in those feces can make their way into the intestines of a dog that eats feces.

Another possibility is the dog stepping in cat feces and then later licking its paws. Any eggs in the feces are easily ingested this way. And even that is not the end of the possibilities. Here’s a third one: a flea ingesting a tapeworm egg found on a cat can transfer that egg to a dog just by landing on the animal’s skin. That dog may eat the flea to stop the itching, thereby ingesting the egg. 3. Ringworm Can Be Passed

Despite the name of this disease, ringworm is not an intestinal parasite. It is actually the result of a fungal infection. Ringworm is easy to spot because it causes hair loss in patchy areas around the ears, on the forelimbs, and on the face. The disease takes its name from the red rings that normally appear in areas of hair loss.

The worst part of ringworm is how easily it is passed between animals. It doesn’t take much. The spores that cause the disease can live for up to a year under the right conditions. So if your dog comes into physical contact with an infected cat, the spores can easily travel between the two. Your dog can begin exhibiting symptoms of ringworm shortly thereafter.

Ringworm can also be carried to your dog by way of food dishes, pet toys, and even your clothing. This is why we recommend people thoroughly wash themselves and their clothes after coming in contact with a cat showing symptoms of ringworm. Once ringworm is established among household pets, it is extremely difficult to eradicate.

4. Dogs and Cats Can Get Colds

We normally think of the common cold as a condition that only affects human beings. That assumption is true, but only to a certain degree. Both cats and dogs can contract a similar illness known as bordetella bronchiseptica – a.k.a. kennel cough. This is a bacterial infection that causes cold and flu-like symptoms mimicking what humans experience with the common cold.

Kennel cough tends to be more severe for dogs than cats, which is why you want to be careful if a stray cat in your neighborhood is exhibiting symptoms. Kennel cough causes fever, coughing, sneezing, lethargy, and a discharge from both the eyes and nose. If you haven’t picked up on it, kennel cough is a respiratory illness.

Unfortunately, this disease is easily spread between cats and dogs. Like the common human cold, the bacteria responsible for kennel cough can be transmitted through casual contact. All it takes is a little bit of saliva transmitted through the air by way of a cough or sneeze. And of course, an infected cat licking your dog can also transmit the bacteria.

If you suspect either your dog or a stray cat has kennel cough, keep an eye on it. Most animals recover just fine on their own. Should you need to take the animal to the vet, an intranasal vaccine will likely be administered. The vet might also ask how you think the animal might have contracted the disease.

5. Your Dog Can Get Rabies

The big disease most dog lovers are terribly afraid of is rabies. Such fears are completely reasonable if you understand that rabies can be fatal. The problem with rabies is that it is usually not diagnosed until it is too late. By the time a cat or dog begins exhibiting signs of rabies, it cannot be treated. Most animals diagnosed with rabies eventually die from the disease. And yes, your dog can get rabies from an infected cat.

Rabies is transmitted through saliva. One of the most common ways it is passed between animals is through bites. But your dog doesn’t have to be bitten by a diseased cat to be infected. Any contact with saliva could transmit the disease.

Because of the deadly nature of rabies, there are laws in all 50 states requiring rabies vaccinations for all household pets capable of contracting the disease. That means your dog has likely been vaccinated. However, a single vaccination doesn’t last forever. The reason you are required to take your dog in for a new vaccination every few years is to keep the animal protected for as long as it lives.

Of course, it is always better to protect your dog by keeping it away from a rabid animal to begin with. But that might be easier said than done if you are dealing with a stray cat infected with the disease but not yet exhibiting symptoms. The next thing you need to know is that the length of time a cat has been a stray matters in terms of potential diseases. It is a simple exercise in math. Bearing in mind that strays are former household pets that either wandered away from home or were abandoned by their owners, it is reasonable to assume that strays are in relatively good health at the point they first find themselves alone.

Provided a stray eats properly and stays away from other infected animals, its heath should remain fairly stable for the rest of its life. But the chances of that happening are not good. The longer a cat remains living as a stray, the more likely it will contract some sort of disease. It is one of the realities of nature.

7. Fleas Can Be Passed On

Flea infestations do not count as diseases, but we decided to include them here because of how common they are. Any stray cat with fleas is very likely to pass those fleas on to every other animal it comes in contact with. The cat can even pass them on to you, if you are ‘lucky’.

A flea is a flightless insect that survives mainly due to its parasitic nature. Fleas are found all over the world in both natural and domestic settings. In fact, there are some 2,500 different species of fleas discovered by science thus far. They attach themselves to mammals and birds alike, feeding on the blood of their hosts.

As fleas are flightless, they have to jump from one host to the next. But make no mistake: they are excellent jumpers in every sense. Even casual contact between animals can transmit fleas from an infested cat to an otherwise healthy dog. Also note that fleas are prolific breeders. It only takes a few fleas in your home to end up with a full-blown infestation in a matter of weeks.

All the other diseases aside, fleas are the first thing to worry about when you encounter a stray cat. The last thing you want is to be a carrier back to your own home. If you do notice that a stray has fleas, make sure none have made the jump to your clothing or skin before going back into the house. We close this guide with a standard warning of safety. The best way to prevent your family dog from contracting a disease carried by a stray cat is to approach all sick animals with caution. Do not just assume that a stray cat is healthy because it looks that way. Sometimes a medical exam is the only way to know that a cat is sick.

Always approach a stray cat with the understanding that you will not touch it until you are reasonably sure the animal is well. If you’re forced to come in contact with the cat before making that call, wash yourself and your clothing thoroughly afterwards. There is no point in taking unnecessary risks.

Should you have to approach a stray cat that looks visibly ill, protect yourself. Wear long sleeves and pants along with rubber gloves and eye protection. And if the animal appears aggressive, just leave it alone. You will not be able to help an aggressive cat anyway.